About:
Most analyses of real estate prices compare their behavior over time with other economic indicators, but this is done for a specific country or independently for a group of countries. This text proposes a comparison of real estate prices between different countries by calculating the correlation between them.

Data:
I came across some data on real estate prices (https://data.world/finance/international-house-price-database). This data contains values of 4 quantities (with short descriptions found in wikipedia and other sources):

It is calculated by subtracting personal tax and nontax payments from personal income.

Analysis:
As input we have time series with specified quantity $Q$ (HPI, RHPI, PDI or RPDI) for N (N=24) countries ( 'Australia', 'Belgium', 'Canada', 'Switzerland', 'Germany', 'Denmark', 'Spain', 'Finland', 'France', 'UK', 'Ireland', 'Italy', 'Japan', 'S. Korea', 'Luxembourg', 'Netherlands', 'Norway', 'New Zealand', 'Sweden', 'US', 'S. Africa', 'Croatia', 'Israel', 'Slovenia'). In order to calculate correlations between countries I do the following calculations:
The dynamics of the thus calculated correlation function $C_{country}\left(t \right)$ for the quantity $Q=$RHPI and for all countries is shown in Figure 1. For the quantity RHPI, the correlations are most apparent. 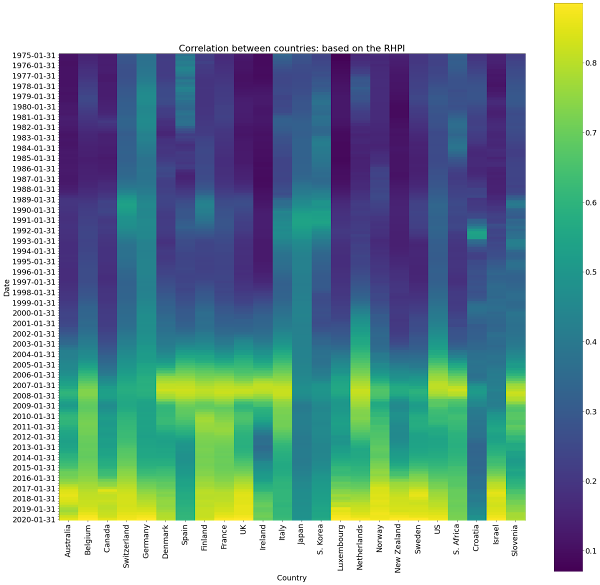 A couple of observations for the time period 2007-2008:
The longest increase of the value of RHPI is seen for the US, lasting since about 1995. Other countries behave in a weakly correlated way during this period. A strong correlation between countries starts to be visible from about 2005 and quickly increases until the crash around 2007-2008. It looks as if most countries joined the global real estate market at the same time (around 2005) and at a given signal decided to crash - "ready, steady, crash!". The market seems to be too well orchestrated. I know that some people will say that this is a normal behavior because it is a global market, all markets are interconnected, etc. However, please note that it is hard to see any trace of the dot-com crisis of 2000-2003 (dot-com bubble) in this picture. Another comment on the picture concerns the number of countries participating in the crash. There are some countries excluded (Japan, S. Korea, Israel) or weakly participating in the process (Australia, Canada, Switzerland, Germany, New Zealand, Sweden, Croatia). Altogether, 13 countries out of 24 are affected by the crash.

Observations for the time period 2008-now:
The first observation is that more countries are now correlated (and not because of COVID). Still outside the correlated market are Japan, S. Korea and Croatia. Spain, Italy are not correlated (accident at work?).

Summary:
the management of the real estate market is becoming more and more concise (only one player? ): currently 19 countries out of 24 (crisis 2008: 13 countries).
Question: when will this player decide to make another crash?

If anyone has knowledge of more data I would be grateful for providing it.
Posted by Bogdan Lobodzinski at 12:58:00 PM