Inspired by a question "What can we learn about social behaviour from recommender database ?" which arises from my previous note Recommender Systems and q-value Potts model I spent some time considering a following question:
The question:
how to control opinions in a social group by creation of an environment with whom the group can interact ?

Let us start to define the toy model.
In a given social group we have a set of opinions $K$ distributed among all group members. The group collaborates with external world through an interaction with some set of opinions stated in an external environment. We assume that the environment is too big to be manipulated by the social group, but the environment can modify somehow the distribution of opinions inside the group.
For a better transparency we consider 2 different opinions described as $A$ and $B$. Opinions $A$ and $B$ are defined as states "+1" and "-1" correspondingly. Members are distributed among two subgroups according to a shared opinion and interact with the same environment but with different strength: $\gamma_{A}$ and $\gamma_{B}$ respectively. The $\gamma_{A|B}$ coefficients correspond to the level of group members acceptance of noise created by the environment. Or, in other words, the coupling constants $\gamma_{A|B}$ are weights which characterize how much a given group relies on opinions supported by the environment. The level of believe in a group is proportional to the value of $\gamma_{i}$ couplings. The scheme is depicted in the picture 1. 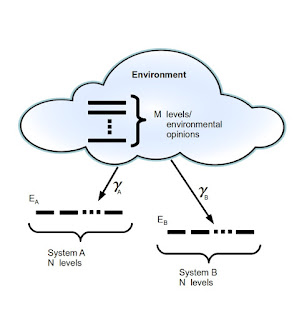 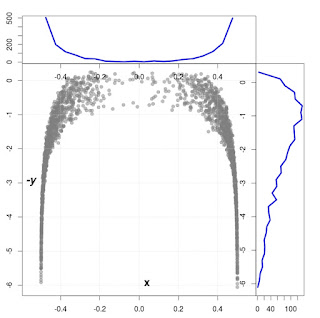 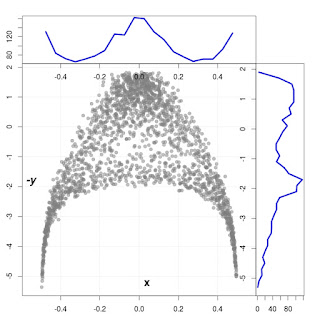 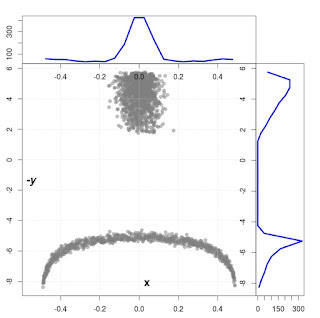 The next Figs (5,6,7 and 8) shows asymmetric situations where $\gamma_{A} = \gamma_{B}/10$ and different values of $\gamma_{B}$. Detailed values of other parameters are noted in the figure description. 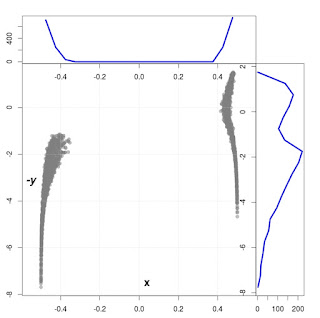 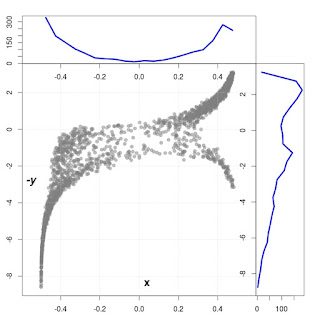 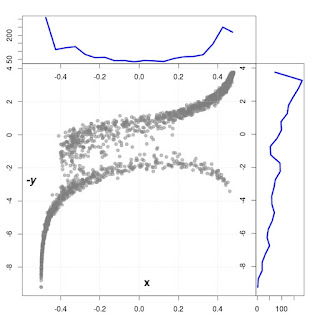 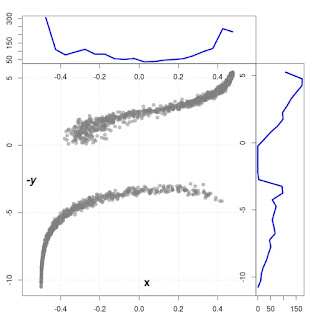 
The landscape presented on all plots of eigenvalues of the Hamiltonian $H_{eff}$ is quite straightforward for those who are familiar with atomic physics, especially interactions of multi-level atomic transitions with resonant light. We see clear existence of so called coupled and uncoupled level (states) combinations . The increase of the coupling constant $\gamma_{A|B}$ leads to a creation of grouping of eigenvalues.
The eigenfunctions in the Hamiltonian can be formed in such a way that some combinations of levels cancel the interaction part with the environment - they are called uncoupled (or trapped) states. The number of such states is $N-M$.
Other level eigenfunctions are coupled with the environment's states - such an eigenfunction we call coupled (or un-trapped) states ($M$ decaying states). Populations of trapped states can survive longer time (smaller values of y) in comparison to the un-trapped states, where the populations is exchanged between coupled states by the interaction term proportional to $\sqrt{\gamma_{A|B}}$.
Let us try to translate this physical picture into a social language.
If we define an opinion power as a parameter proportional to the number of eigenfunctions which share the same range of opinions we see that in steady-state conditions the opinion created by the trapped states (i.e. weakly coupled with the environment) has a greater power of persuasion than an opposite social group characterized by the un-trapped member's configurations (i.e. strongly coupled to the environment).
A higher level of noise (larger value of $\gamma_{A|B}$ and different values of couplings $\gamma_{A} < \gamma_{B}$) doesn't lead to reduction of a significance of unwanted opinions but creates just the opposite action:
it sharpens the polarization of existing opinions and increases the importance of resistance against the environment in a society. Such a situation can be well identified nowadays. The noisy environment is created by mainstream media. What one can find in such an environment: an increasing number of different subjects, news focused on accidents, preferred shorter forms and propagation of a number of opposite opinions and many other similar, as well as different ways of distraction of reader's attention.
Groups of people strongly coupled to such a media stream are not able to define a private opinion and they are easy to manipulate. It also means that the number of people in such a chaotic environment will migrate rather to more stable social groups (trapped states), not so strongly dominated by the mainstream news.
The creation of people without a strong, private opinions is a goal of the present liberal governments. But, as it is presented in this note the chosen way of social control leads just to opposite behaviour. You can see it around yourself, don't you ?
In the model, we used the condition where the number of intermediate states in the environment $M$ is smaller that the number of states in considered social groups $N$: $M < N$.
The opposite case leads to a bit different picture than described in this note, but it is a subject for an another post.

Posted by Bogdan Lobodzinski at 3:33:00 PM No comments: